I met a lady several years ago was allergic to gluten. Her allergy to it was so bad that coming into contact with it or breathing it in could seriously damage her health, even kill her. I found it amazing that from the surface, no one could tell she had Celiac Disease. She had learned to stay away from the thing that could kill her.

There was a time that my wife believed she had the same allergy. Her symptoms were less severe, but they were still symptoms (i.e. tummy pains and skin problems). The hardest thing for a woman with an Italian heritage to change is eliminating wheat from her diet. Because wheat is such a staple ingredient of so many people’s diet, it would be a hard thing for many adults to eliminate. I don’t think we really ever removed it from her diet, we just reduced the amount of it. After the birth of our son, many of the issues were not as bad. After a while, her consumption of wheat products went back up. I think some of the symptoms are starting to come back. Maybe the wheat was rearing its ugly head in a way that wasn’t easily noticeable. There is a chance, however, that the wheat was doing its damage in the background. That’s what scares me.

This week I read an interesting article on the Tim Ferris blog: How to Keep Feces Out of Your Bloodstream (or Lose 10 Pounds in 14 days). With a title like that I couldn’t help but read it. As I read about the health issues of the three different individuals mentioned in the article, I began to think of my wife and some of the issues she has dealt with for most of her life. After I read this article, I shared it with my Mother-in-Law messaging her, “ Could my wife be in this same situation?” Could her diet be slowly, silently killing her?

Thinking of this as a slow killer made me think of smoking. Would anybody smoke if the first inhalation caused immediate symptons such as death? I don’t think so. But I am pretty sure the lady that could possibly die from eating gluten, would never consider eating it. But smoking doesn’t immediately kill you, instead that inhalation creates a different result that some find pleasant and calming. The possibilities of what it does down the road seem relatively insignificant compared to the effects produced in the here and now. 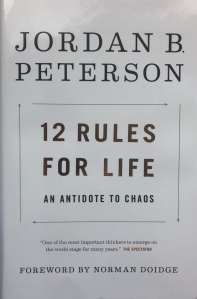 Another thing I am reading is The 12 Rules For Life by Dr. Jordan B. Peterson. I have only made it through the second chapter, but everything I have read so far has hit a nerve (in a positive way). This second chapter discusses what a person would do for her sick pet. She would go to great lengths to make sure the pet is cared for and the medicine is administered. But would she go to those same lengths to take care of herself if she was sick? I know I am guilty of this. Have I always done the right things concerning my body? Have I always taken my medicine when I was supposed to? Toward the end of this chapter, I found a passage that really stood out:

I read this and began to think how important it is for me to take care of myself. Eating right and working out may seem like a selfish endeavor, but in reality it is more than just about me. I have to take care of myself, because there are others who are depending on me, who love me. Not eating right and not working out could be some of the most selfish things I could do. 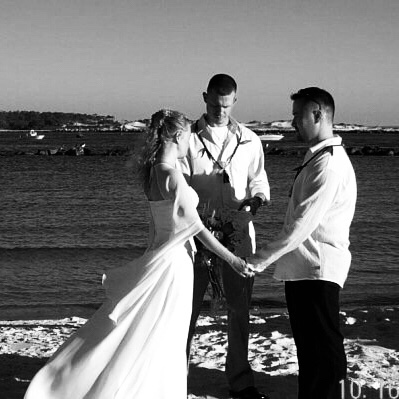 Today, I was thinking about wedding vows. I have been married over 13 years, and wedding vows are not something I usually tend to think about. I guess if you live the vows, there is no reason to consciously think about them. But I was thinking about them today. A traditional wedding vow is fairly simple: “I am going to be there regardless of what might happen.” It is really a basic pledge to stick with it, but maybe it is missing something. Maybe our vows should include, “I am going to do everything in my power to make sure I am there for you. That means I am going to eat healthy, workout, do everything I possibly can to ensure the success of our union. I’m not going to give up on you or myself. I am going to be there, for you, for our family, for those that depend on us.” This is not what I said all those years ago, but I probably should have. But then again, it is not what I said back then that really matters, it is my everyday actions that count.

What are the things that are slowly killing you? Are you aware of it? Are you doing something about it? It is not just about you. The ramifications of your actions are felt by those who love you, by those who depend on you.