Life is short, and truth works far and lives long: let us then speak the truth. -Arthur Schopenhauer

By speaking the truth you can never go wrong. And after you have left this short life, you will be remembered because of it.

The Virtue of Justice

Practice, the master of all things. -Augustus Octavius

The Virtue of Temperance

Control. Discipline. Restraint. Call it what you will. But if you don’t have it, then life will be much harder. Rather than automating your life for success, your habits will be weak and detrimental. Temper your desires of excess. There is joy in moderation.

If you want to win, practice virtue. If you win with virtue, your opponent buries himself. -Awa Kenzô

Under many names but here’s the list: wisdom, courage, discipline, justice, faith, hope, charity. Practice these and win.

The Virtue of Prudence

There is an unlimited wealth in having wisdom that goes beyond money, possessions, and social status. We can all grow in wisdom if we choose to pursue it. King Solomon regarded as one of the wisest to have lived said: Happy is the man who finds wisdom, and the man who gets understanding, for the gain of it is better than gain from silver, and its profit better than gold. –Proverbs 3:13-14

Can you hear the call of wisdom? It is there, we only have to listen.

Worry weighs down the heart, but a kind word gives it joy. -Proverbs 12:25

I might not understand all the worries of those around me, but I can lend a kind ear and try to empathize.

The Virtue of Charity.

Many view charity as financial aid to the less fortunate. But charity goes beyond gifts of money. We can be charitable in our actions to those who need it. We can lend a helping hand to those who are suffering physically, mentally, and spiritually. How far can a kind smile, a kind word, or a kind act go? Sometimes these gifts go much farther than money.

A man without a goal is like a ship without a rudder.-Thomas Carlyle

Do not be aimless. Set your course and then navigate your way there.

The Virtue of Hope.

There is a belief by some that tomorrow will be better, that our future will be a little brighter. This hope is what spurns them to keep going even when the day is at its darkest. Without hope, we are lost.

There are days when you wake up and you are just not feeling it. Everything is slow, including you. Those days suck. You want to go, but seem stuck. Even coffee isn’t doing the trick.

That’s how I felt this morning. I felt lazy and unmotivated. There are so many things I want to get done today, but I just can’t seem to get going.

What do you do?

Well, there is really only thing any of us can do. We gotta move. It doesn’t matter if we are moving in slow motion. Just moving a little will create momentum. It may be hard, but as Mr. Marden says, “Effort is the only means of improvement.”  If you want to improve, put in the effort. Go.

Activity is the law of growth; effort the only means of improvement. Whenever men have obeyed their lower nature and ceased to struggle to better their condition, they have deteriorated physically, mentally, and morally; while, just in proportion as they have striven honestly and insistently to improve their situation, they have developed a larger and nobler human type. –Orison Swett Marden, Ambition and Success.

We see quotes all day long. Often they are very inspirational bits of wisdom that cause us to think from a different perspective. The person being quoted has found success in their area of expertise and has shared this pearl of knowledge in hopes that others may find their own success. Does it work? Is the quote just a quick meme to generate some likes? Does it actually resonate within you? Does it cause you to think? Even better, does it cause you to act?

The quotes are out there. They are essentially public domain and are ripe for the taking. Only you can find the truth of the message and apply it to your own life.

Any truth, I maintain, is my own property. And I shall continue to heap quotations from Epicurus upon you, so that all persons who swear by the words of another, and put a value upon the speaker and not upon the thing spoken, may understand that the best ideas are common property. –Seneca Letter XII: On Old Age

If you are driving north of Jacksonville along A1A, pull over when you see the small sign for Little Black Rock, not too far up ahead as you pass Big Talbot Island State Park. After you park, you will find a trail going into the North Florida jungle. Walk along this trail for about a mile, and as go, you will notice you can no longer hear the sounds of cars but instead the sounds of waves. Crest a sand dune and behold an almost always deserted beach filled with an amazing spectacle. On the other side of this dune is one of my favorite beaches and maybe my most memorable. After I left the Army, I used to surf up and down the Florida Atlantic Coast, but when I went to this beach, I left my board at home. A small barrier island protects the shore from the waves. Over that dune was a mystery I never tried to solve for fear the magic of my ignorance would be shattered. There are huge trees, my guess oaks, laying on their sides with the remains of their branches and roots laid bare to the sun. They are bleached white from the decades, possibly even centuries of exposure. How did they get there? I have no idea, but the power of my imagination has concocted many ideas. I doubt the gods fought a battle and these trees are the victims, but one can only imagine.

My friends and I use to come to this beach and climb and play among the trees as if we were kids again with little worries of the world. The trees were amazing, but for me they were not the best feature this beach had to offer. At the north end of the beach, there is a natural barrier. The ground becomes rocky. A black slick mud covers the ground. It is slowly hardening destined to become a permanent feature on the beach. Over the years, small cliffs have formed from this mud. They are not difficult to pass. They might be a deterrent to some, but the prize on the other side is worth the trouble. Beyond the cliffs is another part of the beach. Even more secluded is this perfect picture of a beach. It is smooth and crescent-shaped with the sea grape-covered dune and palm trees visible in the background. I would often go here and sit at the edge of the water. I would close my eyes and become one with my surroundings. I would hear the soft lapping of the waves and feel the warmth of the sun on my face. I felt like I could sit here for an eternity, meditating, one with the universe. I had so many problems back then and didn’t know how to fix any of them. I may have been having a difficult go at the time, but this moment on the beach was my brief respite, which I so desperately needed. This was my therapy. It may also explain why many other times I would sit on my longboard beyond the break, close my eyes, and search for that oneness.  It has been many years since I have taken that journey down the trail, across the trees, and over the cliffs, but the powerful memories of that beach still permeates my soul. Even now, I can go outside, feel the warmth of the sun on my face, and hearken back to those memories and that peace.

I don’t know how much time I have left on this Earth. It could be decades. It could be minutes. William Penn said, “Time is what we want most, but what we use worst.” When it is all over, do we want to look back and say, “I wish I wouldn’t have wasted so much time on the things that didn’t matter and spent more on the ones that did?” You can’t go back in the past, but you can fix your present and make the most of the time you have left. There have been times I wish I could have gone back in time, but then… I probably would have never made it to that beach.

Iron is sharpened by iron; one person sharpens another. –Proverbs 27:17 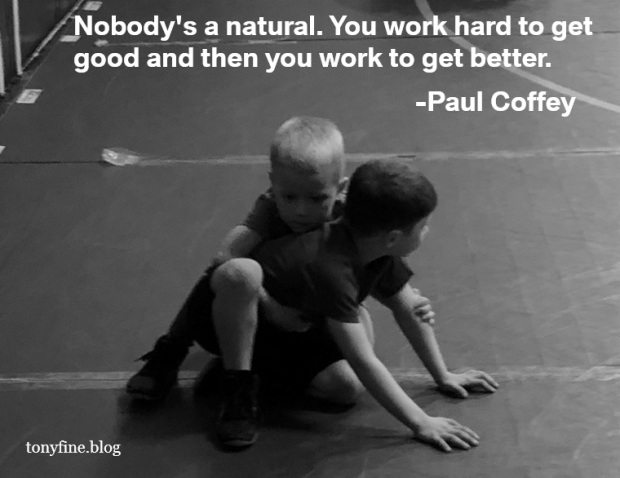 This week I listened to The MFCEO Project podcast #216 with Charlie Jabaley. This is an excellent interview as Charlie has an amazing story. If you can handle the strong language, I recommend that you take a listen. Charlie left a powerful message about the difficulties of first learning how to walk. It is not easy. In fact, it is the hardest thing a youngster faces at that time. But it is a process, and the more he does it, the stronger he becomes. Charlie went on the say that you could do anything in the same way. Want to be a great leader? It is going to be hard, but it is a process. You put in the required effort and time, and you can become a great leader. All you have to do is the work.

Alec’s first season of wrestling is coming to a close. The year brought on many challenges. Alec has never experienced this type of physical contact. As a five year old, even the process of learning the most basic moves was by far one of the most difficult processes he has ever learned. In the first few months, he didn’t seem to get it. But he didn’t give up. He kept working at it. As the weeks passed, he began to get better. Now he can do many of the moves. Even more important, his confidence has grown. He now believes he can compete with the older, heavier kids. He may not win every time, but he is winning. If he decides to stick with the sport of wrestling, I can only imagine what he will be able to accomplish in the following seasons. It won’t be easy. The competition will be getting better every season as well. As NHL legend Paul Coffey says, “Nobody’s a natural. You work hard to get good and then you work to get better.” Keep working Alec. You will get better.