I have always been one to create goals. In my mind, I shoot for the moon. In reality, I come up far short. “This is the year I am going to achieve my fitness goals” or “This year, I will write that book” were annual phrases in my life. My list of all the things I wanted to accomplish in the future kept growing. So many goals created, so little to show for it. Until I unknowingly started creating systems.

It started with work on the assembly line. Do the same work over and over and achieve the same results. The consistency I learned in manufacturing, I began to apply to daily routines. I applied a lean manufacturing concept to my pre-work habits, which tremendously helped me get through those early years working the night shift. The more consistent my routine, the less chance something would go wrong that would keep me from making it to work. I would try to automate my life in every aspect from meal prep to placing my wallet and keys in the exact same place every day. I didn’t know that what I was doing back then would become an integral part of who I am today.

Over the last year, a new system has been instituted into my workout routine. In the past, I would work out when I could at whatever time was available. This of course, led to inconsistent behaviors. With inconsistent behaviors you get inconsistent results. I realized that after a hard day of working on the production line, I was less likely to get in a quality workout, if I even got one in. Often I was too tired or too dehydrated. Back then I was primarily a runner, and after standing all day on my feet, the thought of pounding the pavement was unbearable. In addition, there was the guilty conscience of selfishly spending the last few hours of the day on myself instead of my family.

I was not happy with the results I was achieving. Something had to change. I had to change. So I started working out in the morning. This meant I would have to get up before 5 a.m. to start. So I set my alarm for 4:30. But it was too inconsistent. I would hit the snooze button, make too much noise getting ready, or start too late. I had to bump up the time, though that didn’t keep me from snoozing. So I had to make incremental changes to get it right. I started to get the mix right by setting the alarm at 4, laying out my clothes the night before, and drinking a large glass of water when I woke up. Now my success rate was close to 75%. When I started planning my workouts the night before, my percentages started to improve. 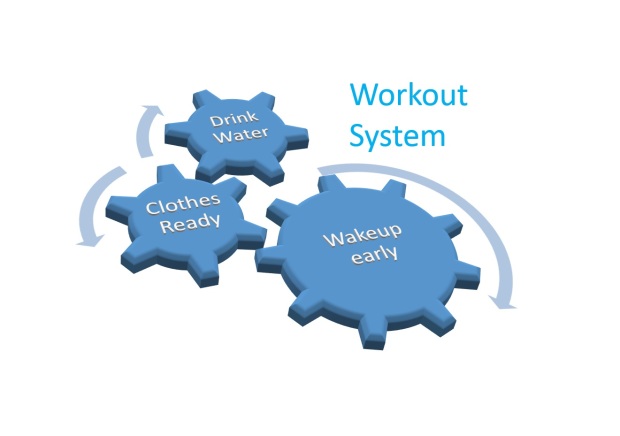 After a month of getting up at 4, I stumbled upon the Jocko Podcast. This affirmed what I was doing. Jocko Willink is a former Navy SEAL commander who preaches that Discipline Equals Freedom

. He says to get up every morning at 4:30 and workout. Not only is he is saying to do this, but there is a whole community of people doing this very thing. They are getting up when the rest of the world is still sleeping and they get after it. Now I am a part of that community and actively holding myself accountable by participating. So here is a tip of my hat and a thank you to the 0445Club, the Samarai Gang, and the Troopers. Consequently, my success rate is over 95%, 7 days a week.

My system for fitness is working. And if it works here, it can work in almost any aspect of my life. I can create a system for writing that ensures a consistent daily output. Having a system for personal finances keeps the bills paid on time and more money in the bank. Developing a system for whatever aspect I want to improve in my life gets me much closer to accomplishment, than the throwing of a quarter in the wishing-well of a goal. I haven’t completely tossed out the creation of goals in my life, but they are now only a starting point to the building of a systematic plan for accomplishing the mission.

There must be a beginning to any great matter –But the continuing unto the end, until it be thoroughly finished, yields the true glory. –Sir Francis Drake